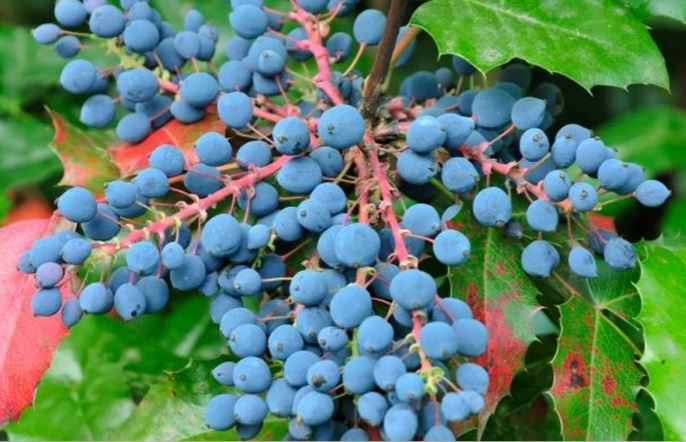 Oregon grape is known for its anti-inflammatory, antibacterial, and antifungal properties and its extracts have been used to treat physical complaints like dysentery, jaundice, peptic ulcers and a variety of skin conditions as well. Additionally, the extract is extremely beneficial for psoriasis, eczema, athlete’s foot, acne and other fungal infections. It also eases inflammation, itching and irritation. Listed below are few of the popular health benefits of using Oregon grapes

Prolonged sadness, anxiety, the absence of appetite, insomnia or excessive sleepiness is some common signs of depression. Deficiency of neurotransmitters like serotonin, noradrenaline, and dopamine in the brain leads depression.

Monoamine oxidase (MAO) is an enzyme that decomposes these neurotransmitters. Research has given indicators that berberine has the ability to inhibit MAO activity and relieve symptoms of depression. By inhibiting MAO, berberine raises the concentration of key neurotransmitters in the brain, giving a clear improvement in the pharmacological treatment of depression.

Berberine present in Oregon grape helps to slow abnormal cell growth in the skin and reduces inflammation. It can relieve the itching caused by skin conditions such as acne, eczema, psoriasis and allergic rashes.

When used on the skin, Oregon grape has been found to combat certain skin irritations. Researchers have concluded that herbal remedies are often more effective on dermatological conditions than pharmaceuticals, and the Oregon grapes power to help fight psoriasis and atopic dermatitis would seem to support that claim.

Oregon grape root is famous among herbalists for its ability to stimulate liver function, improve the flow of bile, and for blood cleansing. Oregon grape root uses have traditionally included treating both liver congestion and infectious conditions of both the stomach and intestines. Another benefit of Oregon grape root is its functioning as an antimicrobial.

Oregon grape berries act as antifungal. Berberine found in Oregon grape is potential to fight against a wide range of bacteria and fungi. Berberine has the ability to prevent the growth of various Candida species, including Candida albicans.

There is also an indication that berberine kills Candida yeast strains that have become resistant to pharmaceutical antifungals such as fluconazole. Researchers discovered that Berberine was not only capable to inhibit the growth of the Candida strains, but to destruct the yeast cell until it could not survive. It could also destroy the Candida albicans plasma membrane.

Berberine works on human cell’s DNA to prevent amoebas from take hold in the body. To consume this herb you can take it effectively as tinctures, glycerites, capsules, powder, oil, and salves. It’s very useful to take Oregon grape on trip with you where the hygiene is poor.

Oregon grape root consists of a number of alkaloids that give it a very bitter taste that can take some getting used to if taken straight. However, the positive benefits of these alkaloids far outweigh the momentary discomfort that their bitter taste may cause. In China, where Oregon grape root is also replaced for the herb coptis, research have shown that one of the alkaloids the plant contains, berbamine, can help strengthen bone marrow and assist chemotherapy and radiation patients in their recovery.

Oregon grape is wonderful to fight against cancer. Researches have shown the relationship of berbamine and cancer-killing effect. Researchers have found that not only does berbamine aid with healing liver cancer, but it also helps with certain lung and stomach cancers, blood cancers, certain skin cancers, and an aggressive (highly metastatic) type of breast cancer.